Argentina football legend and winner of 1986 world cup, Diego Maradona has passed away at home in tigre after suffering a heart attack.

The legend left olivos clinic in an ambulance on Wednesday evening, November 11 after a successful operation.

It remained unclear if the ex footie fully recovered as it came just days after his lawyer Matias Morla, painted a grim picture of the ex footie’s health. 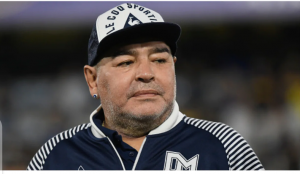 Morla was quoted saying it is a miracle the World cup winner was alive, divulging the blood clot could have easily “cost him his life”.

He said “Diego experienced perhaps the most difficult moment of his life. I think the fact the brain bleed was discovered when it was is  miracle because it could have caused him his life.

Morla’s assertion were in complete contrast with those of the doctors who described the surgery on the former Napoli and Barcelona star as “routine”. Sporty icon Maradona, who spent the best of his playing days at Napoli and also had a stint at Barcelona, passed away in the city north of the Argentine capital  of Buenos Aires, the player’s hometown.