We reported few days ago that a Twitter influencer, Motara, went viral after being filmed while enticing a poor child beggar with a bottle of drink only to leave her hanging.

In the video, Motara is seen driving in traffic when a child beggar walk up to her window to beg.

Motara motions with her bottle of drink, asking if the child wants to drink and she nods. With the window still up, Motara places the mouth of the bottle near the girls mouth.

She came under heavy flack for her actions as Nigerians bash her online, and she lost membership of a charity organization she was part of. 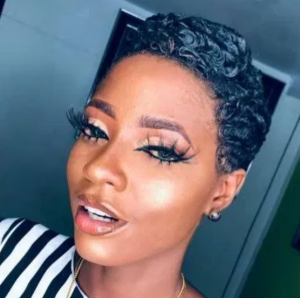 The viral video eventually reached France and united states, and many foreigners condemned her for the act.

The influencer’s Twitter account got suspended and she lost endorsement deals because of the video which many frowned upon.

But in a recent developments, Motara has come out to tender an apology, while narrating how they one thoughtless action caused her life to crumble before her eyes.

Speaking via her newly created Twitter account, the lady said she regrets her actions and is working on being a better person. 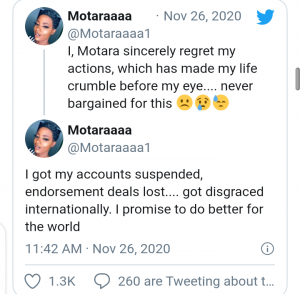 My life crumbled before my eyes – Twitter Influencer, Motara begs for forgiveness after mocking a child beggar.